The name of the city comes from the Polish name "Wół" and is associated with the place of oxen - "city with oxen". The land of Wołów around 990 was incorporated by Mieszko I, together with the whole of Silesia, within the borders of the Piast state. And around 1285 one of the Głogów Piasts, Przemko Ścinawski, located Wołów. It gave a powerful impetus to development.  The place was mentioned in Old Polish, Latinized forms of Wolovo and Wolowo in a Latin document issued in 1202 issued in Wrocław by the office of the Bishop of Wrocław Cyprian. The village developed from the 12th century around the Piast Castle, who located one of their headquarters here. Wołów obtained city rights in 1285.

Located on the southwestern slopes of the Trzebnickie Hills (called Koci Góry - Katzengebirge), which are the central part of the Trzebnicki Embankment, gently sloping south and west into the Odra River valley, and in the north to the Barycz River Valley.  Defensive walls with stylized stone oxen are the showcase of Wołów. In addition to the walls, sights that are worth seeing are, among others Piast castle from the first half of the 14th century, churches of Wawrzyniec and Boromeusz, a charming old town and a market square with the town hall from the mid-15th century. 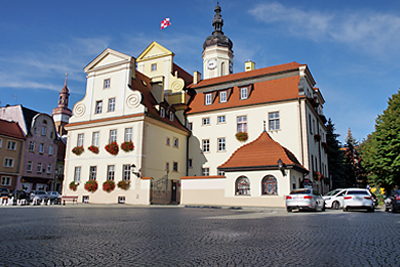 The market square with the 15th-century town hall 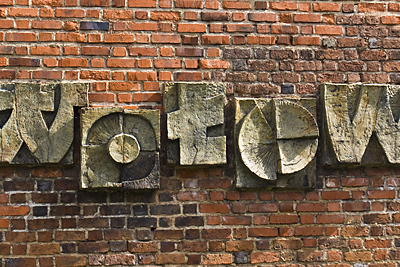 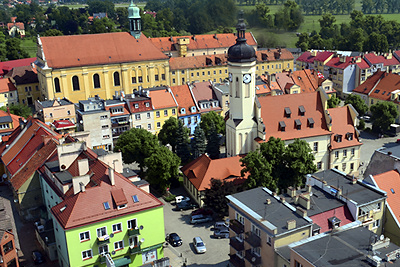 Aerial view of the old town