Way of the Cross

The only Górnicza Kalwaria in the country consists of 14 granite boards. It is a tribute to the mining effort which today - after closing the mines in the Boguszów area - is getting harder and harder to understand for young people. The more important is its existence.

The Way of the Cross was established in 2001 and is not a tribute solely to the miners of the nearby mines. After all, Germans, Frenchmen and Belgians worked in Boguszów excavations. Their families, including mothers, also suffered as a result of unfortunate accidents. And one of the stations is dedicated to him.
The next stations are a place of reflection on stories from nearby mines, but the penultimate - the thirteenth station - is dedicated to the memory of miners exiled to Siberia who in murderous conditions mined ore and coal in the mines of Vorkuta and Kolyma. The fourteenth station is a tribute to all those who died in the mines. Especially those whose bodies were not found. Each station, however, is different and equally important.
The Krzyżowa Road of Górniczy Trudu leads along a gentle, green trail to the top of Chełmiec (851 m a.s.l.) 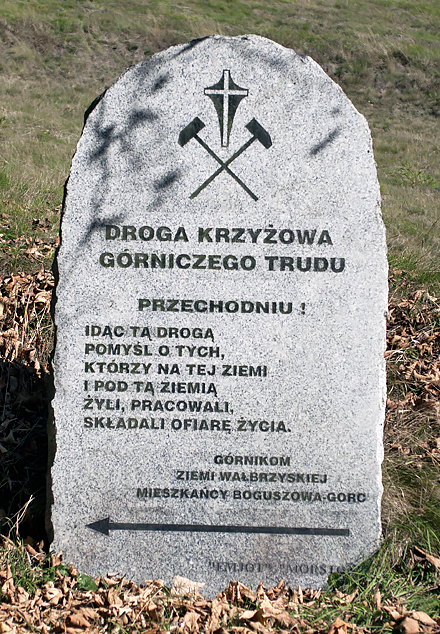