It will not be an exaggeration to say that Wawrzyniec has always been associated with the city. He is the patron of many professions: librarians, cooks, bakers, students and firefighters. He was worshiped in these areas from at least 1296. About this time a parish was established here.

The church named after him comes from the turn of the 14th and 15th centuries. The chancel was the first to be built, and at the beginning of the 15th century, a three-nave hall body was added, covered with a stellar vault. This solution is one of the earlier and more interesting examples of hall architecture in Greater Poland.

The interior itself hides many historic elements. It is worth taking a closer look at the Gothic crucifix and the statue of Our Lady of Sorrows from 1420, the sandstone baptismal font from the 15th century, and the throne of Bishop Andrzej Opaliński from the beginning of the 17th century. The unique organ by Mathias Brandtner is a must see. The instrument with the original pipe mechanism preserved is from 1716.

Therefore, it is not surprising that the parish from its beginnings was a place of solemn meetings and conventions, it served the deliberations of the guild elders, meetings of city councilors, and numerous brotherhoods had their altars here.

Every year, on August 10, there is an event in honor of the patron saint of Wawrzynka Słupeckie. The holiday attracts crowds that can take part in sports competitions, theater shows and folk groups. In the evening, however, the stars of the music scene perform. 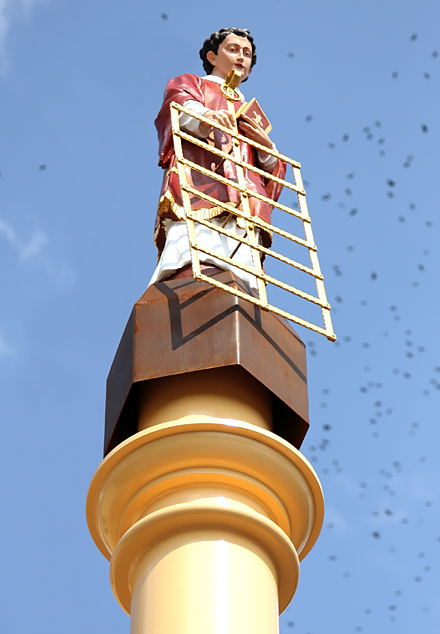