Anyone who wanted to enter the city from the west had to pass through this closely guarded gate. This one here, or three others, all over the world. The Ziębice Gate, which we are standing in front of, is part of the complex defense complex of Grodków.

The walls made of erratic stone began to be built in the years 1296-1301, i.e. shortly after the city was founded. It happened during the reign of the prince of Świdnica, Bolek I. In the mid-fourteenth century, the walls were additionally raised and strengthened. It was ordered by the bishop of Wrocław, Przecław from Pogorzela. It was then that the Ziębice Gate was built, and the walls were surrounded by a moat.

The foregate at the tower was originally not there. Presumably, they were added in the first half of the 15th century. Covered porches were also added in the crown of the defensive walls, where archers could gather. All because of the Hussites, who in 1428 captured Grodków and largely destroyed the city.

If you look at the city center from the perspective of a flying bird, you will notice a characteristic ring of fortifications. It marked the border between the location center and the suburbs along trade routes. The ring has a regular shape similar to an oval.

The gate is located in the western part of the city, at Wrocławska Street, in the line of building the city walls. It is a brick building, plastered in the Renaissance period. It was built on a rectangular plan. In the ground floor of the lower storey there is an ogival clearance with a passage along the east-west axis. The arcade of the passage is emphasized by a brick jamb with stone wedges. The corners of the tower are decorated with rustication.

There are two shooting windows on each side of the tower. The building is crowned with an extensive attic consisting of pilasters, triangular gables and quarter-circular elements. It is worth mentioning that around 1600 the tower was raised, strengthened again and received a Renaissance attic. Subsequent works on the building took place in 1866 and in the 20th century. The gate is all the more interesting as it contains both gothic and renaissance architectural elements. 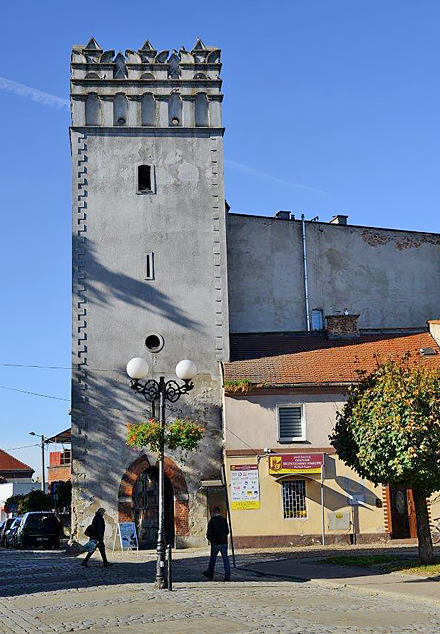