The portal made of sandstone is one of the elements of the temple showing the changes in architectural styles that have imprinted on the walls of the Opole cathedral temple.

It undoubtedly has Romanesque features, but its Gothic slenderness also catches the eye. For some it is a late Romanesque portal, according to others - an early Gothic portal. It is currently a side entrance leading to the cathedral from the south. It is also a kind of time gate from the distant past.
To see this portal you must first go through the massive door of the porch, or vestibule. Outside the cathedral, above the door, there is a tympanum, designed by the Opole artist Adolf Panitz, also the author of the main door of the cathedral. The tympanum depicts the Mother of God with the Child and Pope John Paul II, who in 1983 crowned the image of Our Lady of Opole, famous for his favors, in the cathedral.
The southern porch, i.e. the vestibule leading through the portal to the cathedral, is topped with a cross-barrel vault based on two oval pillars.
It is worth noting the clear, quite irregular, gouging along the portal. According to the researchers, they are the work of former knights, who sometimes, as part of the penance recommended by the clergy, had to renounce their fencing for some time. As a sign of repentance, they reportedly exterminated their swords on a sand portal, carving those lines in it. It was a symbol of being defenseless and not daring to attack anyone, doing God's will. 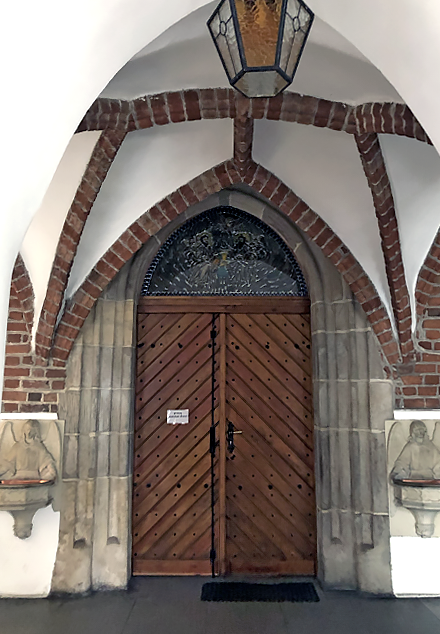